A New Challenge for the Maltese Petroleum Regulators

A proposal for a three-line underground metro system with 25 stations around Malta was unveiled by the government in October 2021. The network would cost around €6.2 billion and take 15 to 20 years to build, according to studies by London-based consultants The Arup Group. A proposed first phase would cost €3.9 billion and could be operational in five to eight years. The system incorporates the three lines, covering a total of 35km of track, running from Bugibba to Pembroke, Birkirkara to Valletta and Mater Dei to Cospicua. It will be entirely underground except for a short stretch between Naxxar and Bugibba. Stations will be located at hubs across Malta’s main urban area but the network will not extend to Gozo after the studies concluded that a population increase of 50,000 on the smaller island would be necessary to make the link viable. Malta has been suffering from increased congestion, deteriorating air quality and a reduction in quality of life as people spend more and more time commuting. The road network in Malta does not have the capacity to accommodate continued growth despite the recent infrastructural upgrades.”

The proposed underground system will use twin tunnels at an average of 10 to 12 metres below street level to minimise the impact on the properties above. Excavated material will be reused for land reclamation, subject to further environmental analysis and assessment.

The study includes proposed locations for the stations, although the public consultation phase will consider other locations. 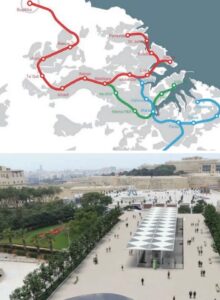 With about 3000 citizens per square mile, Malta is the 5th most densely populated country in the world with 614 cars for 1000 citizens. Most of the island’s citizens live in the geographical area surrounding Valletta, the capital city and heart of the economy and service sector, reaching from Pembroke in the north to Birgu in the east, Tarxien in the south and Birkirkara in the west.

A new quarter with thousands of apartments and Malta’s biggest shopping mall was founded in Sliema, a second-quarter for even more citizens will soon be realized on Manoel Island, il-Gzira – accessible via only one crowded main road!

A dense population in a small region, highly motorized, lead to a critical traffic situation decades ago. Public transport is accomplished by buses, which makes it unsustainable, unreliable and uncomfortable due to frequent traffic jams and other disruptions on the road system. Already to try and reduce vehicle congestion the Government has recently announced that pubic transport by users will be free to Maltese residents to try and reduce car use.

The proposal to install the Metro system around the more densely populated areas is out for general consultation. It is estimated that if built it will reduce journey times, save tonnes of CO2 and reduce traffic accidents and improve air quality. This is likely to produce some major challenges for the Petroleum Regulators on the islands as the routes will pass close to some of the filling stations. The more modern sites will have double wall tanks and pipes and leak detection but the older sites will be more of a problem as they will need to be either closed or upgraded to reduce the risk to public safety. This issue is not a new one and in London and other cities around the world solutions had to be found when new underground railway lines were introduced and constructed which necessitated the closing or upgrading of sites to enable safe storage of fuel and reducing risk to the travelling public.

Read more articles like this in the APEA Bulletin. Become a member today.

The Charge to EV!